“The Wyld” is used to describe both the formless chaos that exists beyond the elemental poles and the places where that chaos has intruded upon Creation, most notably in the wake of the Fair Folk invasion that followed the Great Contagion. 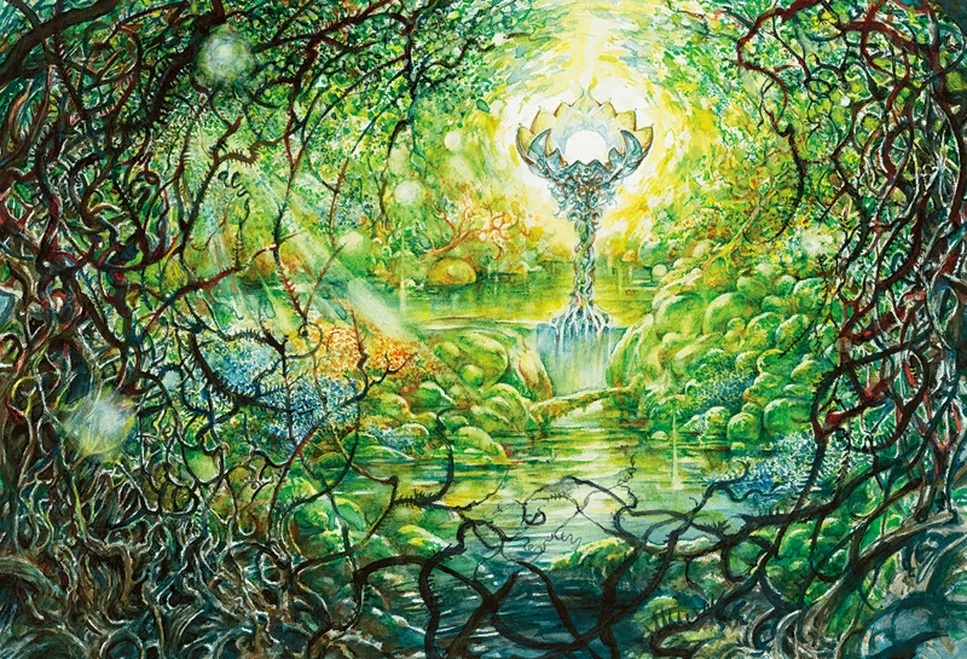 Madness may lie in the depths of a mind, where intent and action become fluid and strange things. When speaking of the mind, there are many words and treatments to consider, based entirely upon the means of the malady. Be it induced from shock, the backlash of magics, the ripping through by ghostly possession.

But when applying the term madness to the wyld, you realize there are far different strata to such understandings. Consider instead the wyld as an alien world in which the language is story and the intent is as individual as the colors of the rainbow.

When reading this, realize that these words will not even come close to harnessing what the wyld truly is. But I will try.

To understand, I’ll walk you through from Creation into the Wyld using the mindsets of both Exalts/Mortals and Raksha.

To mankind, Creation is a stable, linear realm. Each thing has a name, has a related cause and effect, and works within the balance of rules determined by science, the gods, and magic. If the Unconquered Sun shines harshly, water evaporates into the sky. When it collects, clouds form through the workings of science. When pregnant with molecules, they form bonds, growing heavier. It is then storms form and return the water as rain.

Gods of rain and farming cultivate the drops into the soil to grow things. Elementals thrash and grow stronger in the give and take. Rivers and lakes rise. The cycle begins again. This can be conceived, believed in, and accepted by all mankind. Any deviation is a use of magic, elementals growing restless, etc. And each of those things is a cause with an effect.

The mind of man can grasp and accept the reality of Creation for they are both kindred. To them it is a thriving place.

The Everything of Nothing

Now look to the polar opposite of the Wyld and the denizens there. The Wyld is literally nothing filled with everything. Words cannot be placed on what “could be” because it has not been crafted into “what is”. The minds of the Raksha are limitless, formed only as consciousness with dreams and visions. Pure creativity with emotional ties to each other. The thoughts and designs give any definition between one creature and another. They do not see each other, do not have any sense of form as man may understand.

The Wyld is a place of energy that can be carved into fluid forms, every changing based on the influence of the minds near it. In the farthest reaches, there is no form. Not even color or mist. The closer they come to Creation, they perceive the need for forms simply to interact with the rules they must destroy. Each level out into the world from pure wyld is considered tainted by rules and laws of being, existence, etc.

The raksha therefore must also adhere to forms. As they move further, they shape their regions, or freeholds, upon their own dreams and whims. While we look at a tree and call it TREE, they look inward for inspiration, craft a story of heroism, deceit, murder, life, etc and carve their concept of forest. It could be their own body, an object made of metals or twisted snakes, but to them it is a tree.

Between Creation and Pure Wyld

The Wyld is made up of lands, be they pocket realms hidden from the sight of man and exalt or entire regions skirting Creation.

The Bordermarches are the portions of the Wyld closest to creation, regions that are not so much areas of total entropy but subtle changes to reality. The Bordermarches are certainly more dangerous than most areas of Creation, but the chaos is not so extreme that madness and death are a constant, extreme risk.

Where reality is warped into a barely recognizable state. Here the dangers to Exalts increases a thousand folk. Lunars without tattoos should not approach. Solars must have charms to protect themselves and their gear. The ideas of reality literally are held the mind of the freeholders. Mortals can lose their minds here, or fall into absolute dreamtime.

No mortal can hold their thoughts or hearts in the deep wyld. Exalts even with charms and tattoos can become mutated here. These Raksha are literally one step away from unshaped glory, aching and powerful, lashing out in the world around them. Only demons and rare first age exalts have ever entered this place, though they rarely escaped.

Where the Unshaped reign supreme. The Unshaped are the true forms of Raksha. No exalt or god has EVER entered this area.