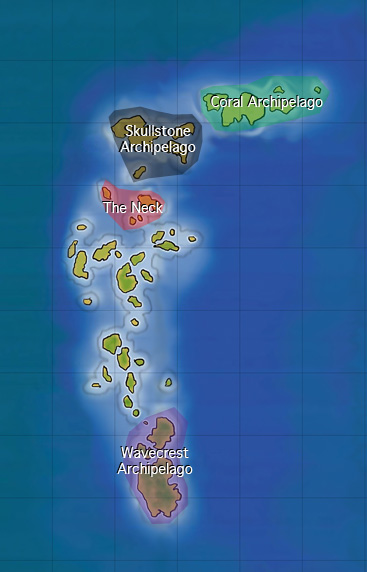 As the Inland Sea passes the Blessed Isle and becomes the Great Western Ocean one enters the West. At first, the islands are large and common, but the further west one goes, the smaller and less frequent they become. Once past distant archipelagos and scattered islands beyond them, there is only a horizon: where the sea and sky come together and it can only be distinguished at sunrise and sunset. Even the most experienced sailors find it maddening to sail too far out, for what is there to find save more ocean stretching out unto the end of time?

This is the least populous of the directions, as there is less land for people to live upon. Due to this lack of arable land, vegetables other than cultivated kelp are a luxury in the islands. There are stretches of temperate land to the Southwest and the Northwest which allow for actual cultivation, until the mountains and deserts of the South or the frozen wastss of the North make farming an impossibility.

In the true West, the political unit is the island and thus each island or archipelago grouping of islands forms its own independent nation. Although not everyone in the West is a sailor, pirate, shipwright or fishermen, the sea cannot be ignored by anyone. A child who cannot sail a boat by the age of six has been raised poorly. Many of these island nations entertain the pirate trade, though only the Wavecrest Archipelago and The Neck allow non-aligned pirates to openly enter port. (They and the outright pirate nation of the Lintha, that is with its secret port of Bluehaven, whose location is said to constantly change.)

The Southwest and Northwest have collections of coastal nations instead of islands ranging from Realm-affiliated principalities to petty kingdoms and republics ruled by Outcaste Dragon-Bloods.

Clothing is oriented toward practical shipboard wear. Westerners give offerings to the sea spirits, the bow spirits of their ships, the spirits of wind and weather and good fortune and any other spirits who may have a bearing on the situation. Western culture is frequently patriarchal, with women’s roles in the community being well defined if not actually confining. Visiting women from outside a particular island are often treated as honorary males for the duration of their visit to minimize the cultural impact, but they are encouraged to remain in the foreigners’ quarter of town rather than test local hospitality.