Near the shores fo the Inland Sea, this region is composed of chilled grasslands and pine scrub which slowly gives way to bitter windy taiga and finally thick tundra. It is a land of long and cruel winters with short summers that doesn’t warm enough to prevent freezing rains from pelting the landscape and inhabitants of the region. Past the tundra is a permanently frozen waste that runs north to foothills and the northernmost mountains. Past those mountains, it is said, lies an expanse of snow and wind that finally becomes the Elemental Pole of Air.

The North is sparsely populated region of Creation with scattered tribes of icewalkers and a number of city-states which have developed around defendable positions that possess food and shelter for the people to enjoy. Due to the harsh conditions of the land, war between these city-states is rare even though they are located along the shores of the Inland Sea and the White Sea.

Ancestor worship is common among the people of the North. And two Deathlords are rumored to operate in the North. There are no fixed marriage customs in the North; if the ghosts of one’s ancestors do not object than the marriage is considered blessed. Due to the harshness of life and the limited resources available, unwanted or deformed children are typically abandoned to the cold.

Down the northwest coast toward the West, the frozen White Sea becomes true water, with open sea breaking through the ice. Cormorants hunt up and down the coast between the fishing villages and small towns, where the sailors go out in longboats to hunt narwhals and whales, and where divers swim with trained dolphins to bring back fragments of First Age treasures from the seabed. One town along the coast, Liriel-Anneth, is said to house an entire First Age artifact, but it is full of shadows by day and snakes by night, and no sane man sets anchor in its docks. 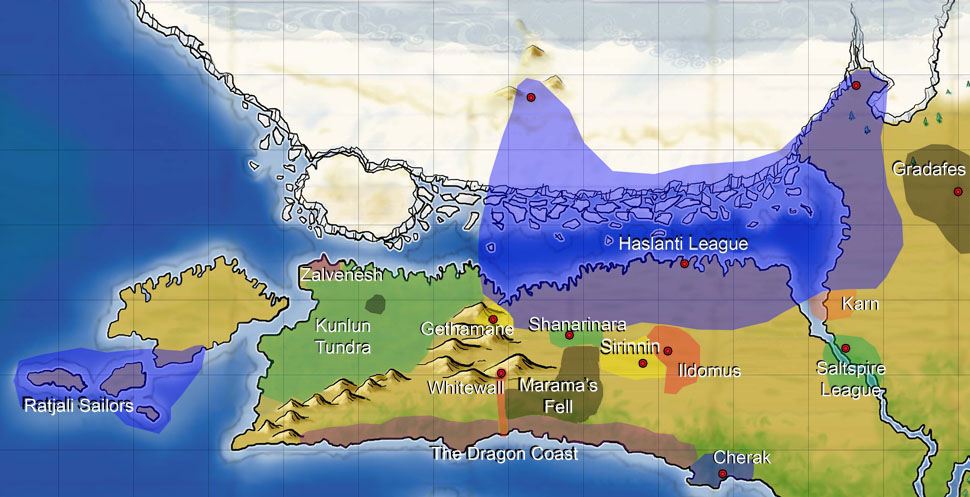