Lookshy is the home of the Seventh Legion, located where the Yanaze River spills into the Inland Sea. It is the military backbone of the Scavenger Lands, and a formidable rival of the Realm.

Lookshy is the most powerful state in the Scavenger Lands and the military power of the Confederation of Rivers. Lookshy’s armies are the most loyal, disciplined and capable forces in the region, and, save for a few exceptions, all citizens of Lookshy were a part of the military at one point or another.

The city of Lookshy is definitely a sight to behold; a sprawling city of jade-infused stone sits at the mouth of the Yanaze. Known for their great military, it should come as no surprise that the wondrous city also houses both defenses in its very structure as well as permanent guards along its streets. 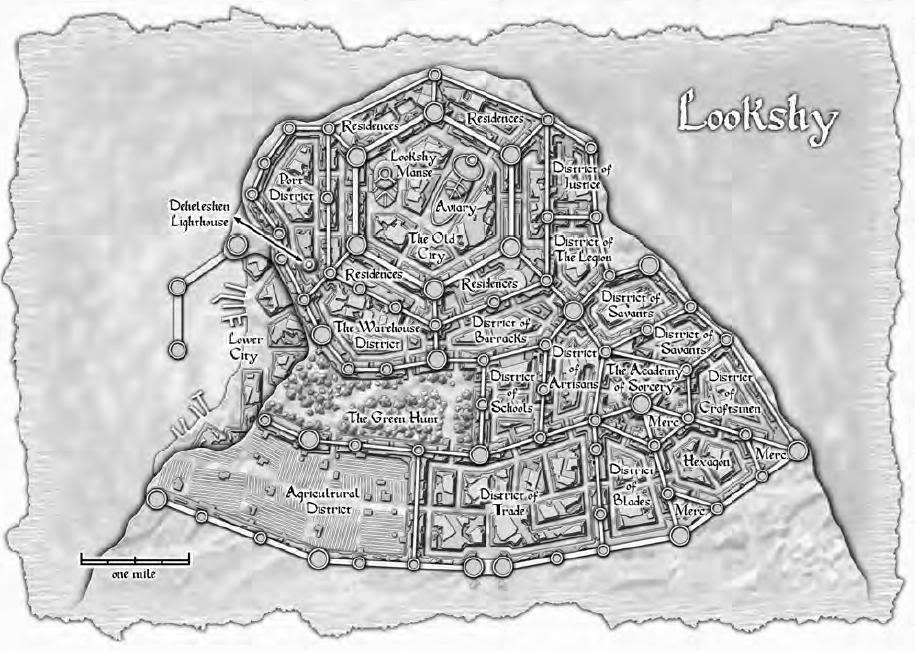 Also called the Foreign Quarter or the Lower City, the Fourth Ring of Lookshy is accessible by anyone, as passes are needed to access any of the other districts. It largely consists of metic-run businesses, guild houses, marketplaces, apartments, temples, and salons. It’s a relatively safe place to be in Lookshy, as long as one stays on the main thoroughfares, made safe by regular patrols of justicars and mercenaries.

The Fourth Ring consists of five districts, each separated by protective walls. The District of Agriculture is the largest of the five and consists of small, meticulously maintained fields that supplement other production and serves as source of food in case of an emergency. The District of Trade is the first sight of any traveling into Lookshy by land and consists of large marketplaces. Anyone can set up shop here for a small price. The District of Blades is filled with blade smiths, weapon smiths, armorers, and martial instructors and is patrolled regularly by Mercenary Scales from the next district. The Hexagon houses Pel Kan’s Ordinaries, a famed mercenary company that provides peacekeeping patrols for the Hexagon and the District of Blades. The last district, The District of Craftsmen, houses workshops and warehouses which manufacture all sorts of non-martial products.

The Third Ring, or the Savant Quarter, houses schools, tea houses, libraries, game-lodges, and amphitheaters. It is a place of learning, rife with students, savants, philosophers, poets, and sorcerer-engineers.

The Third Ring consists, like the Fourth Ring, of five distinct districts. The Green Hunt is a very unique space in Lookshy, filled with forests and trails, giving the people of Lookshy a place to relax. It is also a place to honor the dead, tombs and giant victory-plates erected in unusual places. The District of Schools is home to the city’s finest academies and three prominent hospitals, as well as prestigious dojo and exclusive tea houses. The District of Artisans is not unlike the District of Craftsmen, with crafters plying their trade, although many of the items are of a more fragile quality. Given this district contains some of the city’s most valuable items, is it constantly monitored from above by sky ships. The District of Savants is filled with foundries, factories, and pollution (although a sorcerous engine keeps the pollution from any other district), all for the construction of Essence-powered weaponry, building, ships, and machines. The Academy of Sorcery is the last district of the Third Ring and, along with the Academy itself, is home to three fortified warehouses containing confiscated artifacts.

The War Quarter, as this ring is often called, is brighter and safer than the other districts of Lookshy. Most citizens and many helots live and work here and many of Lookshy’s administrative offices can be found here.

The Second Ring consists of five distinct districts as well as residential areas.The Port District is the first of these districts and is home to Lookshy’s naval operation as well as the Lookshy Naval Academy and the Deheleshen Lighthouse, the oldest structure in Lookshy. The eastern section of the district, however, is the fabulous homes of the merchant princes of Lookshy, which host a number of exclusive and expensive galas. The Warehouse District is primarily used for storage of exports and dry goods intended for use by the military and has very limited and narrow access. The third district, The District of Barracks houses the soldiers of Lookshy and contains barracks, parade grounds, target ranges, training halls and administrative buildings. The next district is the District of the Legion which houses the Operations Directorate headquarters in what was once the Business District of Dehelesen. The last major district of the Second Ring is the District of Justice is also the most heavily guarded with only one entrance from the District of the Legion. It is the headquarters of the Justice and Security Directorates as well as the Nightwatch Citadel, Lookshy’s high-security prison.

The old city is the one of the most unique parts of Lookshy as, with a few minor restorations, the Old City is as it was prior to the Contagion; nothing had ever breached far enough into Deheleshen to threaten it. Most of the buildings, which were once fortresses and mansions, are now administrative offices. There are three places in the Old City which hold an even greater value than the area itself. The Lookshy Manse is a heavily armored and equipped fortress, which is intended as both a launch point for long-range weapons and a retreat point. The Aviary is the landing point for the Sky Guard’s skyships as well as another powerful manse and The Teocall of Tu Yu is a massive pyramidal structure housing Tu Yu that is the ceremonial center of Lookshy.

Sitting 500 feet below the Old City and protected from the sea by a high, ancient wall and a massive citadel sits the Lower City. This is a district that never sleeps, with workers constantly transferring cargo from the docks to different warehouses in both the Lower City and the Warehouse District and maintenance personnel repairing and refitting triremes at all hours the the day. Due to the docks and the lack of permanent residences in this district, the majority of businesses consist of lunch bars, taverns, tea houses and those that make their living in maritime trades.

Forty-seven lift tubes run from the Lower City to the Port District in the Second Ring. These lifts are Essence-driven elevators and roughly half of them are working to carry cargo, equipment, or passengers on a trip that lasts between one and ten minutes (assuming the lift does not break down). During the peak hours, the wait for a lift can be between two and three hours, so many decide to use the system of stairs, ramps, and ladders that run along the retaining wall with lead to the Sava Heedra Terminal in the Port District.

Firkin’s Bull, Gaming Club
In the Second Ring of Lookshy is Firkin’s Bull, a gaming club owned by a grizzled, old soldier who spent more than his fair share of time fighting for Lookshy. When he finally retired, he bought a small gaming club to allow him some consistent funds during his retirement. It’s a simple hole-in-the-wall type club and, more often than not, filled with soldiers.

While the base of the building is designed like a majority of Lookshyan buildings although clearly accented with Chiaroscuran designs and fake gold paints. The smells of the Southern city flow out of the tavern from dawn until dusk and the friendly waitstaff help the place remain ever popular.