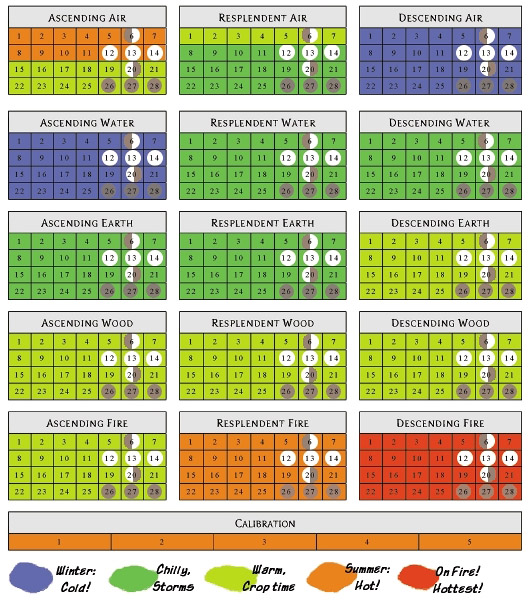 In the calendars of Creation, Calibration is a period of five intercalary days which belong to no time in the rest of the calendar. Calibration is generally regarded as a time of ill omen, and many tragic events from the beginning of the Usurpation to the disappearance of the Scarlet Empress have occurred on Calibration. The sorcerous spell for summoning a Demon of the Third Circle can only be cast during Calibration.

For the Dragon-Blooded, it is a time of festival and celebration mixed with religious fervor. House Cynis hosts the year’s biggest, most luxurious party during Calibration. You’d be able to find pretty much every vice known to man during a bacchanal of that magnitude.

Calibration is a time when there is no Moon – Luna has simply vanished. Calibration has no cosmology; there are no stars in the sky, no sun or moon; day never breaks, but night fails to fall, leaving the world in a five day twilight, or darkness-without-blackness. Seeing as it is bracketed by both the height of summer and the dead of winter, it is also be five days of the most terrible storms imaginable.