The Lintha are a band of pirates and smugglers terrorizing the West and South from their secret port of Bluehaven. However, they are not simply a pirate fleet. They are a criminal family led by an ancient race of primordial origin. The word Lintha is commonly used to refer to this of God-Blooded, while the term Lintha Family is used to describe the extended family of pirate captains that make up this powerful band of cut-throats. 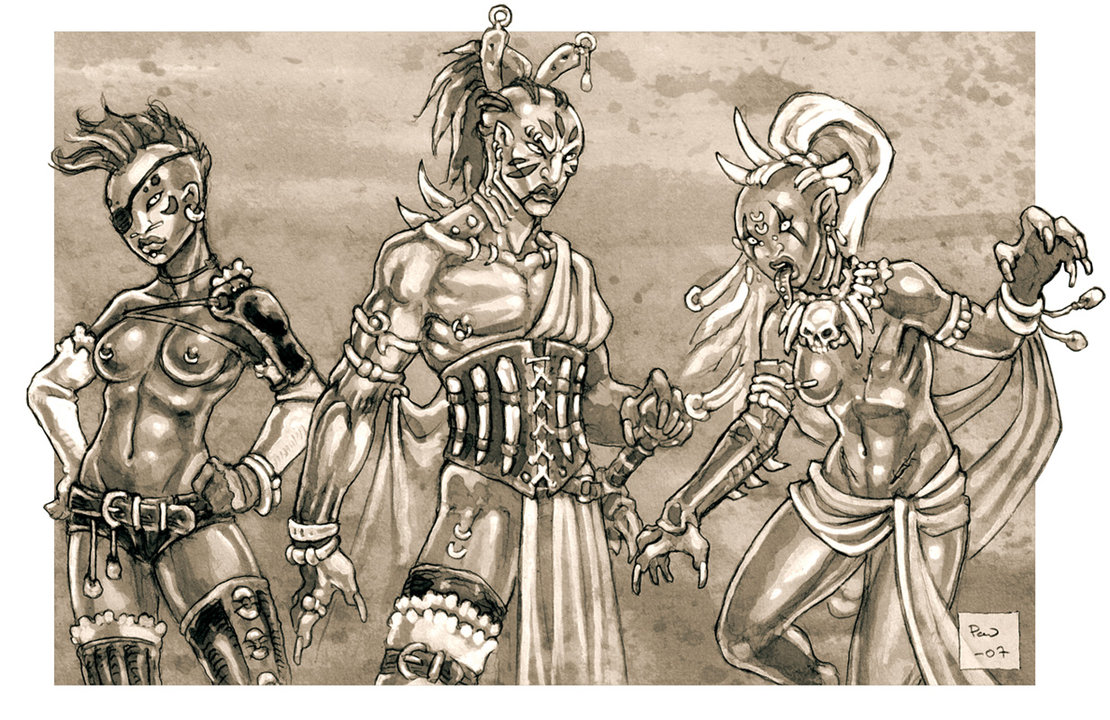 The Lintha are descended from an ancient race, pre-dating the Primordial Wars. The Ancient Lintha were a glorious, but arrogant and cruel, race of God-Bloods born from the seed of Kimbery. The Ancient Lintha ruled a magnificent Empire in the West from their capital city of T’foor Na, The Blue city. However, the ancient Lintha sided with their mother during the Primordial Wars, and were slaughtered by the Armies of the Solar Deliberative. Only a few Lintha survived the generations of Wars that followed, most of whom were sold into slavery or turned into refugees. At the end of the Wars several dozen Lintha refugees came together with the intention of recreating the Lintha Kingdom, but they were captured and left for dead by the new rulers of the West.

The survivors were forced to turn to canabalism to survive, and would have died without if not for the timely rescue from another of Kimbery’s progeny, the Demon-blooded Leviathan, Lintha Ng Oroo. Oroo, the living island, returned her cousins to the original site of the Lintha’s capital city, which had been reduced to a sargasso sea by the events of the Primordial Wars. From here the Lintha began again, harvesting slaves from nearby islands and interbreeding with them.

In the modern era, the Lintha race has been nearly bred out of existence by mixing blood with mortals. However, a careful program of selective marraige, castration, and forced breeding with Demons related to Kimbery, has slowly begun to reinvigorate the Lintha Bloodline. Modern Lintha are tall, but slightly shorter than their ancestors, they have lean long limbs, and fine angular features. Most modern Lintha have gills on their necks as well, which is the most outstanding difference between them and their ancestors.

When People think of Lintha they usually think of terrible pirates and slavers travelling in long ships without sails, rather than thinking of a race of God-Blooded. The Lintha Family, built around the Lintha race, is made up of a wide variety of people who form the most terrifying band of Pirates in Creation.

The Trademark of the Lintha, besides their cruelty and brutality, are their sailless ships. Lintha Pirate ships, with a few exceptions, are all towed through the water by massive sea creatures, giving them unrivalled speed and manueverability over short distances. The Lintha are also known to leave no survivors on their raids, although they will take captives who will be castrated and sold into slavery. Another of the horrific rumors about the Lintha is their practice of cannibilism. In truth, Lintha pirates will eat the flesh of fallen companions as a sign of respect, but it is still a practice that terrifies their victims.

Joining the Lintha is easy. Any Pirate or Slaver in the West or South can contact the Lintha Family and buy a title and position of respect with a large enough bribe. Others can join the Lintha as well, without the need for a bribe, simply by performing an act that benefits the Lintha and draws their attention. The Lintha family has spies and recruiters in every major Port in the West and South, and even some further out.

Leaving the Lintha on the other hand is impossible. Once you have signed on with the family, the only way to leave is death. Every year a few initiates, who join the family without realizing what they are getting into try to leave, even by fleeing to another part of Creation. Every time, the family goes to extreme lengths to publicly and brutally assassinate the offender.

After their distinctive ships and well known brutality, the next most recognized feature of the Lintha is the Auhzian, a sword and fighting syle unique to the Lintha Family. In the West and parts of the South, anyone carrying an Auhzian is instantly recognizable as being associated with the Lintha.

An Auzhian is a type of cutlass, with a short chopping blade, soft padded handle and hand guard. The pommel, hand guard and every inch of the weapon is covered in sharp spikes and blades so that any surface can be used to attack and the blade ends in an abrupt hook that can be used to disarm or rend opponents.

The Lintha fighting style has a ritualistic internal code of honor based on single-combat and respect. However, outside of the Lintha Family this style is considered dirty and dishonorable because of the free use of showy-attacks, underhanded tactics, and vicious maneuvers. Also notable is the Lintha penchant for the use of a Terrestrial Martial Arts style originally employed by their most ancient enemies, the Mosok Dragon Kings. Black Tide Style, which is particularly elegantly deployed while the wielder is submerged, is now primarily remembered only by those cannibal pirates.